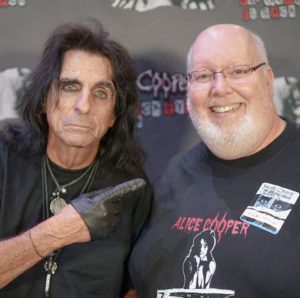 I’ve been very lucky to get to meet and to know, to some degree, Alice Cooper.

After the opening of his Theatre of Death Tour in 2009, his managers, Shep Gordon and Toby Mamis, invited me to write a blog post about the night for Alice’s website. I did, and then I wrote similar posts for three other great experiences I had.

The Opening of the No More Mr. Nice Guy Tour – May 12, 2011 (the time our intrepid hero had his own personal concert)

I’ve seen a total of 30 Alice Cooper concerts, plus two dress rehearsals and the original group performance described in the 2017 post above.

Incredibly sad news this morning: Mark Talbot-Butler has died. His willingness to share his time and collection with APES fans was immense. Over the years, he contributed nearly 2400 high-quality scans of APES stills to the Archive.RIP, Mark. I will miss you.--Hunterpota.goatley.com/stills/ ... See MoreSee Less
View on Facebook
· Share