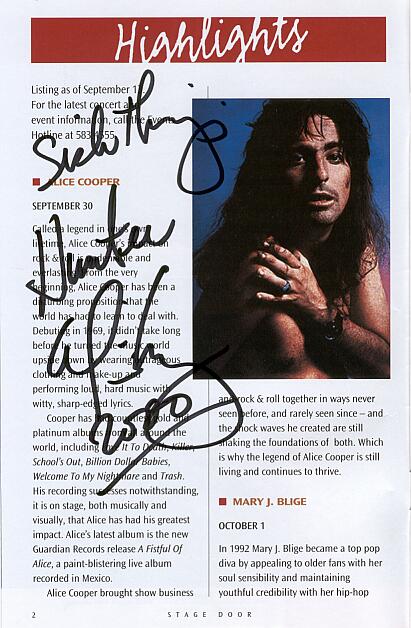 Here’s the relatively short version of the first time I met Alice Cooper after a show in Louisville, KY, on September 30, 2000.

I saw Alice perform for the fourth time in 1991 (the Operation Rock’n’Roll Tour) and started my AliceFan (later SickThings) list in early 1992. The entire lifetime of the list, Alice never played in Nashville or Louisville, and other places were too far away for me to travel at the time. Finally, in 2000, Alice played in Louisville at the Louisville Palace. I had contacted Brian (Alice Cooper’s assistant, whom I had known online through the SickThings list) and told him that I was finally going to get to see Alice again, and he wrote back and told me not to buy tickets, that he’d see to it that I would get two complimentary tickets.

A couple of days before the show, Matt Coddington wrote to me to be sure that I was going to the show. I told him that I was, and he wrote something like, “You’re going to have a great time.”

The night of the show, I went to the Will Call window and gave my name, half-expecting them to say, “Sorry, there’s nothing here for you.” (I didn’t distrust Brian, I just wouldn’t have been surprised if he’d forgotten.) But no, there was indeed an envelope for me. I opened it up and about fell over when I found two VIP passes inside. (I had planned to take my then 11-year-old daughter to the show, but she was sick, and it was a school night, too, so I left her at home. I ended up going to the show alone.)

After the show, I put my VIP pass on and walked over to where all the other people with passes were waiting. A security guard told me to go sit down with all the rest of the people. Unbeknownst to me, the VIP holders had already been taken back—I had delayed too long in getting over there. So I sat and waited, wondering when I was going to get to go back. After about a 15- or 20-minute wait, this guy came out and yelled, “Is there a Hunter Goatley here?” I stood up and said, “Here!” and he yelled, “You’re supposed to be back here!” I hustled up to him and started following. Turns out that the man was Toby, and as we walked through the innards of the Palace to get to the dressing rooms, he was yelling, “VIP coming through! VIP coming through!” 😎 I told him that the guard had told me to sit down, and he said, “You have a VIP pass. He wasn’t supposed to tell you that.”

We finally reached the room, and Toby told me to go inside. I walked in, saw a bunch of people lined around the room, and glanced to my right to see Alice sitting at a table signing items for people. I couldn’t believe it. After being a fan for approximately 23 years, I was six feet away from Alice.

Brian was standing behind Alice talking on a cellphone. He nodded at me when I walked in, but kept talking.

I stood and watched Alice sign items for several people, and then there was no line. I had assumed Brian would introduce me to Alice, but he was still talking on the phone, so I screwed up the courage to just walk up to Alice and introduce myself. Because I hadn’t known for sure that I was going to meet him, I had no camera and nothing to get signed other than a program the Palace had given away advertising the shows for the season. One page was devoted to the Alice concert, so I decided to ask him to sign that (a scan of that can be seen above). As he started to sign it, I told him, “My name is Hunter Goatley. I run the SickThings list.” Alice put the pen down, looked me in the eye, stuck out his hand, and said, “It’s good to finally meet you!” A lot of people had told him about me, including some radio DJs in Detroit who had recently mentioned my list in an interview and asked him who Hunter Goatley was and if he was a real person. I was in awe, as I was the only person whose hand he shook from the time I entered the room. Alice and I talked for about five minutes, and then I thanked him and moved away because someone else had more things to sign (packages of the Alice figure that were to be auctioned for charity).

About five minutes later, Brian finally got off the phone, and he motioned for me to come over to him. I did and shook his hand, as that was our first meeting in person after 5 years of email contact. He then turned to Alice and said, “Alice, I want you to meet Hunter Goatley, who runs the SickThings list.” Alice shook my hand again and turned to Brian and said, “You missed that whole exchange, didn’t you?” We talked for another five minutes or so (the Meet & Greet lasted a good half hour or more, with about 15 or 20 people there) (part of the conversation was about my Oxford shirt and how Calico would have hated it—she apparently didn’t like Oxford shirts), and then Toby came in to break up the show. On the way out, I thanked Toby again for coming to get me. He asked if I was going to be attending the Cincinnati show the next night, because he’d put me on the Guest List. It killed me to have to tell him that I wasn’t attending the show, because I was leaving the next morning on a business trip.

It was a momentous occasion for me, and one for which I will always be grateful to Brian. At subsequent shows, Brian always provided me with tickets and passes, but they were always band passes. I was supposed to be there to meet with Brian, but he was always so busy with Alice that I never got to see him. That was the case in 2002 in Louisville again; I got to say hi to Brian quickly before the show, but afterward, just hung out for a bit watching the band members meet with their friends and family.

I did meet Alice again in 2006 in Nashville, but that was through my local radio station. Brian had told me that there were so many professional musicians in Nashville who had worked with Alice and wanted to see him that he just could not get me a VIP pass. But then the radio station DJ, who was a friend of mine, called me the day of the show to tell me that he had a VIP pass for me. When I walked in with the radio group, Brian (who was again on the phone) saw me and smiled. When it was my turn with Alice, I told him my name, and Brian yelled out, “Hunter’s the one who started the whole Internet thing!” Alice looked at me and joked, “So you’re the one responsible for that mess….” I told him that I was only responsible for the good parts. 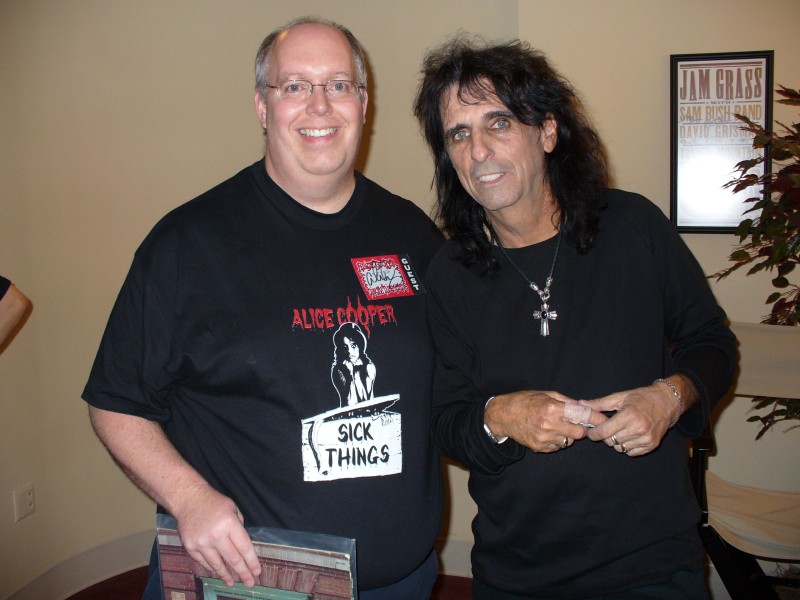 With Alice Cooper in Nashville, September 30, 2006

That turned out to be the last time I saw Brian. He and I had emailed each other periodically, and I’m proud to say that my SickThings2 list was the only one that Brian would participate in. He would occasionally send me news to post or post it himself, but he refused to have anything to do with any of the other lists and groups that popped up after I shut down the original discussion list. That used to piss off all the other list owners, who all wanted Renfield on their lists.

As I noted in my blog on Alice’s site, I was about to contact Brian to tell him I hoped to see him at the Horseshoe show in 2009 when I got the news of his death. As I detailed in my blog, I met Shep the night of the rehearsal, and he told me that with Brian gone, they didn’t want to lose track of fans like me. And they’ve treated me like royalty ever since. Thanks to Shep and Toby, I’ve met with Alice each time I’ve seen him since then (Horseshoe in 2009, Dayton and Nashville in 2010, and now the Horseshoe again), and now witnessed my own private Alice concert!